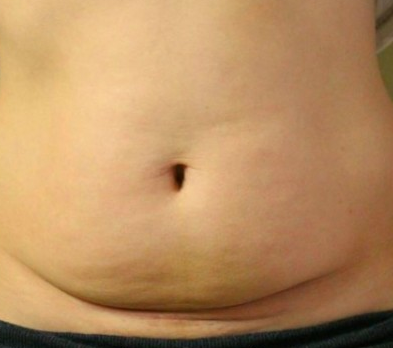 It’s all their faults, the fuckers. 2 C-sections. Now I have this THING. Granted, I’m on the fat side. But it’s so concentrated in my lower belly above my scar it’s strange looking! (That is NOT my belly…mine is bigger)

What is this gigantic thing hanging from my body?

Before kids I had a butt, but my waist was ridiculously small and I had no tummy. My mom used to have to take in my jeans at the waist. My whole family has big butts and small waists and chests. Then I got pregnant and gained 65 points with my first kid (I actually came out of the hospital weighing more than when I went in to give birth and never took a pound off). Every pound was in my stomach.

For years, people asked when I was due. When I got pregnant again, I gained weight all over, and kept those pounds too. Now I don’t look as pregnant, just fat (though since my stomach sticks out way more than my boobs I can still pass for preggers). It’s all my kid’s fault. 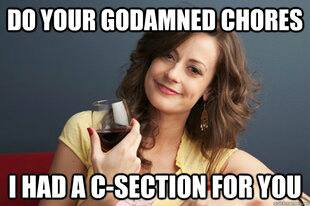 I don’t like being fat, but really, the worst part is where I’m fat. That lower stomach shelf is gross.

3 out of my 4 friends who had twins had their “twin skin” fixed in a tummy tuck. But I have twinskin x 10 mixed with fat. I’m sure if I lost weight, some would go away. But the Dr. says I make scar tissue like a factory, and supposedly my stomach muscles were damaged and I had a small hernia. But from my research, without surgery, this doesn’t go away. Even for skinny people.

For years, I wore spanx (click here to read about some “spanxidents”) but now I just try to dress to cover it, because those spanx would roll down and cut right into the damn scar that still hurts after 8 years. My underwear do that already, that’s enough.

So if there was one thing I could change about myself, that would be it.

How about you? Have you found anything to combat the dreaded c-section shelf? Any tricks to hide it? Exercises? (Who am I kidding, I need to lose 70 pounds before exercise could get near that area with results). Share with the group!

Caregiving, Cookies and Self-Care By MJ Santangelo I?m a wife, a mother of ... END_OF_DOCUMENT_TOKEN_TO_BE_REPLACED

Starting on Monday. What an ideal concept, right? Like Monday is the automatic ... END_OF_DOCUMENT_TOKEN_TO_BE_REPLACED