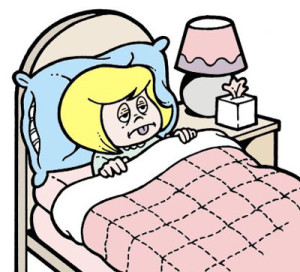 Friday night my 15 year old had to decline an encore for his band because he was losing his voice and was on the verge of getting sick. Then yesterday he and my husband caught the little stomach bug I had last week (which of course did not result in any weight loss at all).

Yesterday, my 7 year old also complained of a headache when his friend was here, then fell asleep before 7:00 pm.

So this morning…this MONDAY morning…when the little one was saying he was “nauseated” and the big one saying he was sick, I didn’t know. Are they full of shit? It’s Monday after all, I used to do it too.

But I’ve also not believed them in the past and then gotten a call from school that my kid threw up or had a fever….then I feel like the worst mom alive.

My husband, the morning driver (it’s easy for him–I won’t go out without a bit of makeup and my hair fixed up, he doesn’t have to) wasn’t feeling well either, so we let them stay home.

By 11:00-11:30, we realized, they’re being silly idiots together and should totally be at school. ?But really, the end of the day are the high schooler’s throwaway classes and the little guy’s recess…screw it, they can stay home, their acting was good enough to deserve a day off. Right? Right????

Sovrn
Previous Post: « Adding some color to my wardrobe….or not
Next Post: Did I Just Flush Money Down the Toilet? »

Caregiving, Cookies and Self-Care By MJ Santangelo I?m a wife, a mother of ... END_OF_DOCUMENT_TOKEN_TO_BE_REPLACED

Starting on Monday. What an ideal concept, right? Like Monday is the automatic ... END_OF_DOCUMENT_TOKEN_TO_BE_REPLACED