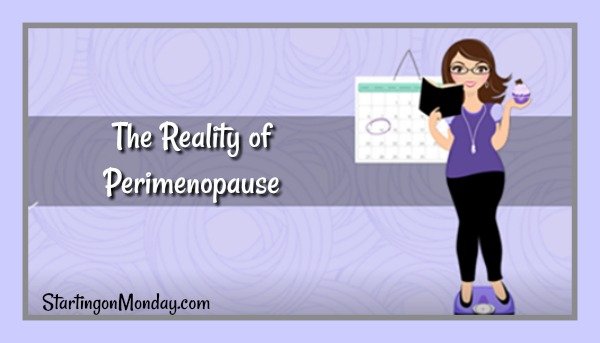 I talked about getting old last week. Now let?s talk about the hell that is menopause, or actually Perimenopause.

Because of the autoimmune illnesses I have, I can?t take hormones. My husband has a fear of doctors and will never get snipped. I should have tied my tubes during my last c-section but never thought about it until the doctor put me on the spot in the middle of the operation. So we?ve been using condoms for years and taking our chances for the couple of days before and after my period. Well now that I never know when to expect my period, that fun is shot.

For the last 2-3 years, I started getting irregular. I should also own stock in EPT, because we were careful, but those days right before or after my period may not be as safe during menopause, you know? So I take a pregnancy test every month just to be sure.

Also, it is SO FREAKING ANNOYING to NEVER know when Aunt Flow is going to pop by for a little visit. I never leave the house without wearing a pad, just in case.

In the last year, my hot flashes have been out of control. It started a few years ago and got WAY worse if I had a drink, so I don?t even drink wine anymore. I keep battery fans everywhere I go, because it?s not just getting hot, it?s FIREY DRAGONS CLIMBING OUT OF THE PITS OF HELL IN MY BODY. And it happens 20 times a day!!! And then I am so wrung out after, I just want to cry.

When I planned this post last week after my post on getting?old, I hadn?t had my period since April 7th. I just told my cleaning lady she would have an extra shelf because I was going to get rid of all my pads and tampons soon. Then BAM. After 212 days gone, that bitch Aunt Flow came back, and made up for being gone for 7 months! We were just getting confident to give up condoms too ?

Weight is IMPOSSIBLE to lose during menopause. WTF? I can do the same exact thing that I lost weight on before, and now I will gain weight. The struggle is real. My boobs hurt, my eyes are dry, they say I will need lube soon (but that part hasn?t hit yet), I want to cry for no reason, and oh yeah?.did I mention the HOT FLASHES FROM HELL?????

And this shit can go on for YEARS! You aren’t officially in menopause until you haven’t had your period for a year. I made it to 212 days and have to start the clock again! UGH! At least the light at the end of the tunnel is no more periods and birth control.

The worst part? The only thing that happens to men is they lose their staying power, poor guys, take a blue pill and all is good. ?

Caregiving, Cookies and Self-Care By MJ Santangelo I?m a wife, a mother of ... END_OF_DOCUMENT_TOKEN_TO_BE_REPLACED

Starting on Monday. What an ideal concept, right? Like Monday is the automatic ... END_OF_DOCUMENT_TOKEN_TO_BE_REPLACED

Get those mammograms ladies! Do it before you star