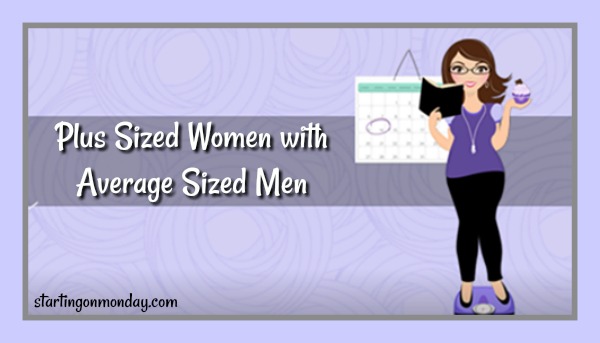 I’m plus sized my husband is not.

Last week a ?fitness trainer? wanna-be model wrote that he and his friends laugh at men who have partners that are bigger than them. 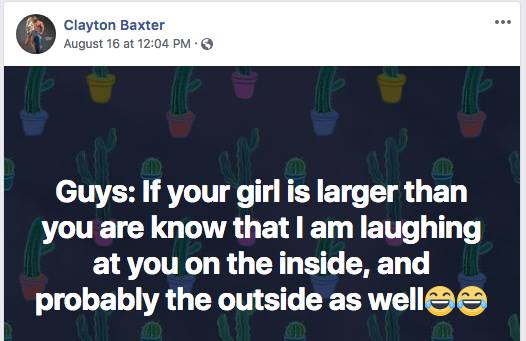 This really hit home for me and hurt more than I wish it did. My husband is 150 pounds. I will never be 150 pounds again. Even when we met when I was a size 7, I was 144. I was also 19 and didn?t have 2 kids and a connective tissue disease.

My husband, bless him, has never said a word about my weight gain over the years. He fell in love with my ass at 144 pounds and still tells me he loves it daily, 31 years and 70 pounds later. He still lets me know he wants me. He still makes me feel desired. He still compliments me and touches me all the time. We still have great sex, often. He has no problem flipping me and putting me where he wants (OK, maybe I have to help a little). I still make an effort to look good. I still have pretty hair and look younger than my 51 years.

He has lost much of his hair and has gone mostly grey. He has even lost a few back teeth. But does that make me love him any less? NOPE, in fact, it makes me love him more. He?s mine for over 30 years and at 59, I still think he?s hot.

Society has taught us that the men should be bigger than the women. And there is never an issue when there is an overweight man with a skinny woman, I mean that?s the norm, look at the Flintstones, The Honeymooners, Married with Children, Modern Family. We are used to seeing society’s norm. But if a smaller guy is with a bigger woman, he’s a “chubby chaser”, or has a fat fetish.

How about maybe he just fell in love with a woman? Maybe he’s attracted to a woman that feels sturdy and can take a little pushin’ amiright? You know the saying, “more cushion for the pushin'”. Maybe he likes soft curves and full breasts and ass. Why should other people judge? Maybe it’s not his usual body type but he fell in love with the PERSON inside?

Last year I saw an IG post that went viral from a man who loved his curvy wife.

|| I love this woman and her curvy body. As a teenager, I was often teased by my friends for my attraction to girls on the thicker side, ones who were shorter and curvier, girls that the average (basic) bro might refer to as “chubby” or even “fat.” Then, as I became a man and started to educate myself on issues such as feminism and how the media marginalizes women by portraying a very narrow and very specific standard of beauty (thin, tall, lean) I realized how many men have bought into that lie. For me, there is nothing sexier than this woman right here: thick thighs, big booty, cute little side roll, etc. Her shape and size won’t be the one featured on the cover of Cosmopolitan but it’s the one featured in my life and in my heart. There’s nothing sexier to me than a woman who is both curvy and confident; this gorgeous girl I married fills out every inch of her jeans and is still the most beautiful one in the room. Guys, rethink what society has told you that you should desire. A real woman is not a porn star or a bikini mannequin or a movie character. She’s real. She has beautiful stretch marks on her hips and cute little dimples on her booty. Girls, don’t ever fool yourself by thinking you have to fit a certain mold to be loved and appreciated. There is a guy out there who is going to celebrate you for exactly who you are, someone who will love you like I love my Sarah. || photo cred: @kaileehjudd

And it made me feel better and more confident. But then I thought more about it and it kind of did the opposite. I mean why did this guy go viral with this post? Shouldn?t ALL men feel that way about their wives? I loved his message but it angered me to see it go viral. She is gorgeous. He is average. Why aren?t people exulting her praises for being with average?

Because society makes him a hero for being with a not-even-fat girl. Even as the media is now showing more curvy women on TV, the shaming has gotten worse. The people who sit behind keyboards and comment on articles, the people who throw out insults on Twitter, the people who surreptitiously film people then Snapchat it to make fun of them all make the fat shaming even worse today than it ever was.

Superficial people like this Clayton guy who ridiculed the cover of Cosmo and makes fun of men with larger women? THEY are the problem. THEY are the people that will always love themselves more than another person. It shouldn?t matter what THEY think.

I try to feel that way, really I do, and I’m making progress. But still, it is now one more tool in my box of negative self-talk. Now I need to worry that people are laughing at or judging my man because of ME. Thanks for that, asshole.

Are any of you bigger than your guy? Are you sensitive about it?

Caregiving, Cookies and Self-Care By MJ Santangelo I?m a wife, a mother of ... END_OF_DOCUMENT_TOKEN_TO_BE_REPLACED

Starting on Monday. What an ideal concept, right? Like Monday is the automatic ... END_OF_DOCUMENT_TOKEN_TO_BE_REPLACED