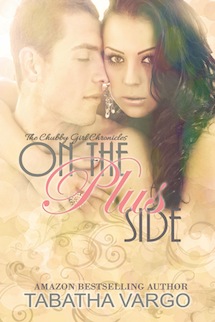 I had heard some really good things about?On the Plus Side?by Tabatha Vargo, and I thought it would be a great book to feature on both of my blogs,?Ana’s Attic Book Blog, and?Starting on Monday. I really loved this book even more than I expected, because it was filled with romance, humor, sexy times and great characters.

Let me give you a little background on myself. I am now plus sized, but spent most of my adult life straddling the line between regular and plus. I didn’t grow up heavy, (though I was referred to as bubble butt a few times), I was never overweight as a kid, just…almost. So I wasn’t quite able to relate to someone that spent their whole life overweight, who never expected to meet a hot guy. (I had no problems in that area when I was younger.)

But I am able to relate now. I can relate to the self esteem issues in the bedroom, and how it feels to be with a guy who loves you anyway. I can also relate to a mom who thinks she means her best but just makes things worse. But I honestly don’t think you have to be plus-sized to enjoy this book!

Lilly was awesome. Twenty years old and pretty set and OK with the fact that she is fat. ?(I was really dying to know how fat she was, and it bugged me till I found out, so I’ll tell you here. “Solid size 20”.) She has never even had a date, but seems pretty happy with her life and her group of friends. She is wealthy from inheritance, but refuses to use the money. Her mom is a petty interfering bitch who loves to make her feel even worse about herself. But Lilly’s inner voice is funny as hell.

“There are a few things in my life that you’d have to pry from my cold, dead fingers before they were ever taken from me. The first thing is my?Spanx. Which, in my opinion, are the best man-maid contraptions ever, better than electricity or chocolate. The creators of these life changing pieces of cloth should be put on a pedestal for all of the chubby girls in the world to worship.?Spanx, the body shaping devices of the fatty girl world…I bow down to you”?(See my post about Spanx here)

Devin is a big, gorgeous playboy of a guy, whose mom took off when he was young. He is taking care of his alcoholic dad and little sister, as well as the family garage. They are under water, and about to lose everything. When he is approached by Lilly’s mom to date her daughter and get out of debt, he knew he had no choice. Either do what she said or have his whole family be homeless.

When he first met Lilly, I was a bit offended for her. Maybe because I’ve heard this line so many times.

“…she was kind of a pretty girl if she just lost a little bit of weight, but hey, some guys like that kind of thing. I’m just not really into that”

But as much as he denied it to himself, he was attracted to her immediately.

“Her cute, round face boasted clear skin and a juicy set of pouty lips.”

“She had the biggest brown eyes, deep set bedroom eyes with a sexy tilt that hid the secrets of a sensual woman.”

But he always adds, in his head “if you’re into that”. As he gets to know her, however, he realizes she is so much more.

“I was attracted to her, not her tits or her ass, even though they were truly luscious, but her. This had never happened to me before, and I wasn’t sure I liked it. Actually, I fucking hated it. She made me feel different. I didn’t want to be asshole Devin, I wanted to be sweet. Like one of those pussy-whipped men you see following their women around buying tampons and shit.”

He likes her so much and wants to end the deal, but he is stuck between a rock and a hard place. But he at least has enough conscience not to sleep with her….right away. But Lilly, a virgin, and is dying to try him out…

“He smiled sweetly as he caressed the dash of the car like it was an actual female. I’d never wanted to be a car more in my life, if that’s what it took to have him softly caress me that way. I silently wished to be a car–I was big enough to be one. I wanted to imagine myself purring every time Devin got inside me and took me for a ride.”

Even though Devin had some dickish qualities, he was really a good guy. He took care of his amazing little sister (awesome side character) and dad, and would do anything for them. And they, in turn loved Lilly.

I kept waiting for something bad to happen. You knew it would….what would happen when she found out? But so many other things happened as well. My heart broke as issues, new and old arose. People’s cruelty just makes me sick.

I really loved this story! Not just because it’s about a plus sized heroine, but because it was a great, hot, sexy romance with a unique set of obstacles for the couple. In almost all the books we read, the heroine is beautiful and perfect. As much as you want to picture yourself as that character, it was nice to actually be able to in this case.

I really enjoyed this book, and loved it more as I read it. I will absolutely read more from this author. She is funny as hell, totally relatable, and the characters are real. I am looking forward to the next in this series,?Hot and Heavy, about Lilly’s friend Shannon, who, like I used to be, is “stuck in between worlds…too skinny to be in the fat girl club, but too fat to be skinny.”

Purchase On The Plus Side by Tabatha Vargo

Caregiving, Cookies and Self-Care By MJ Santangelo I?m a wife, a mother of ... END_OF_DOCUMENT_TOKEN_TO_BE_REPLACED

Starting on Monday. What an ideal concept, right? Like Monday is the automatic ... END_OF_DOCUMENT_TOKEN_TO_BE_REPLACED