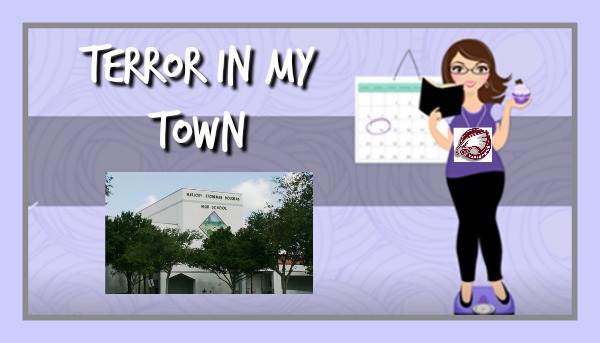 **Note: While this blog has been kind of dormant on and off over the years, I thought this may be a good place to post this, especially with the title Starting on Monday–we can’t put this off anymore, more of our children will die. This was MY TOWN. MY KIDS’ SCHOOL. I SUBBED HERE. I can’t keep quiet.

I am so angry. I?m sad, I?m scared. I have been crying for 3 days straight. My oldest son (graduated) was editor of the Marjory Stoneman Douglas Yearbook. My younger son will be going there in a year and a half. I have substituted there. This is my home.

When I see a mass shooting on TV, I cry with the nation, but it never really hits home until it actually hits your home.

There are so many things that contributed to this tragedy. We don?t know everything yet, but there are a few ways this may have been stopped or the results may have been a little less horrific.

I am so fucking angry.

I know Marjory Stoneman Douglas High. There actually is only one entrance and you have to go through the office. There are cameras everywhere. This was a newer outbuilding. It can?t be kept locked because if a kid has to go to the office or nurse or is late they have to be able to get in the building to get back to class. There is a fence around the whole school, but anyone can jump it. Since it was right before dismissal, the security guard was probably killed while opening the gates.

This is s HUGE school. Even if they had more security, I?m not sure they could have stopped this kid, the campus is very spread out.

My younger son?s best friend is a freshman there. I was frantically texting his mom and dad (our closest friends), and texts weren?t going through because everyone was texting and calling. My son was in middle school on code red lockdown, hiding in a corner, he had no cell service, and nobody knew for sure what was happening.
Meanwhile my friend got these texts from her son and couldn?t answer: 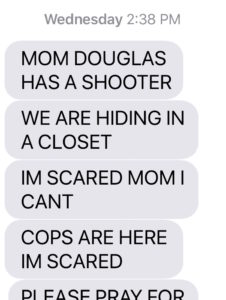 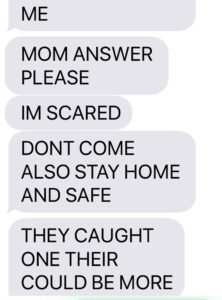 She couldn?t drive closer and stopped at our Walmart and split up with her 5th grader to try to get better reception to text him. Scary to know she was apart from her younger son while we now know the killer was in Walmart with her. His little brother got a text through asking if he was ok, and he texted back, ?No, there is a shooter here, if I die become the best football player, I love you.?

I was driving home from Publix at the time the killer was walking to McDonalds. I PASSED HIM according to the timeline (I think there were several people walking. At that time, I heard sirens but didn?t know what was going on). He was actually caught at the other end of my development.

The ?Safest City in Florida.?

Helicopters have been overhead non-stop. They cancelled the high school for the rest of the week but not any other schools that feed into it. We know these people. They are our community, our family, our teammates our bandmates our teachers, our coaches, our friends. I sent my son to school Thursday and felt very disrespectful. He texted saying nobody was there, he heard rumors of school shootings and was scared. We picked him up and moments later the school was on lockdown. I kept him close Friday.

I need him close.

There are videos being circulated amongst the kids that is not on the news. The kids saw snaps of the blood and dead people. The news blocked a lot of what the original videos were, but our kids saw it. They stepped over bodies and were told to look straight ahead so they wouldn?t see the death around them. They hid in closets for hours.

Yes, you have a constitutional right to bear arms, nothing says what type. You also have a right of free speech, but not libel, not yelling ‘fire’ in a theater. There are restrictions to every right.

Nobody (outside of law enforcement and military) really needs a semiautomatic.

I am so tired of the bullshit ?If he wants to kill bad enough he will find a way?. OK, so let him work to find that way. We don?t need to make it easy by selling them in stores in our city! He is an 18 year old kid that grew up in privileged Parkland?finding black market weapons isn?t as easy as you all think. The other argument??He can buy the parts off the internet?. OK, so you can buy parts to make bombs on the internet too but it doesn?t mean we sell them in the local stores! Why do we make it so easy?

We are all headed to funerals this weekend, and people are arguing ?it?s not guns that kill people, it?s people?. Bullshit. It?s people with easy-to-buy guns that can shoot hundreds of rounds a minute.

I?m not saying ban weapons. I am saying ban semiautomatic weapons like the AR-15. If that is impossible because the NRA is lining pockets, at least make it so only people with military training or special screening, tests and training can buy one. Make the age at least 21 if not 25 (like car rental!) At the very least, limit the magazine size. Will it change much? Maybe not. But if it saves just ONE life, let alone one entire massacre, that is reason enough.

Aurora, Orlando, Las Vegas, Sandy Hook, Texas Church, San Bernadino and Parkland were all done with AR-15-style semiautomatic weapons. If the average joe can’t buy them, they won’t be produced as much and they won’t be as accessible. It’s simple math. We should be able to buy Sudafed without showing ID, but we can’t now. We should be able to get on a plane without taking off our shoes, but we can’t now. We all give up some of our rights for the safety of our citizens. Why can’t gun owners give up a little of their rights for the greater good?

We had an Assault Weapons Ban for 10 years ending in 2004. We have the framework in place. Reenacting the ban or some form of it needs to happen quickly. We know it’s possible, it just didn’t even last long enough to be able to see the benefits. Guns don’t decay, the more guns purchased, the more are made. The numbers keep growing. It will get harder and harder to eliminate assault-type gun violence if we keep pumping them out into the general population. We have to start somewhere. Less guns=less gun deaths. That’s common sense that all the statistics back up. (See the New York Times article below*)

Changes NEED to happen. This community has the resources to do something. I hope we STAY ANGRY enough to institute CHANGE. High school kids are scared, high school kids are close to voting age. Things WILL change. We need to hurry it along. We can’t do this “Starting On Monday” thing.

This is of course a huge issue that needs to be addressed. But it’s a touchy one, and we don’t want to make people who need help more reluctant to seek it. It will take a way longer time to find and institute the much-needed solutions in this area. But it is so important to develop a mandatory reporting system where at least if someone was Baker Acted they can not access a gun within a certain time frame.

Tightening up our gun laws has easy, clear-cut solutions available RIGHT NOW.
-Raise the age.
-No 10-30 round magazines
-Detailed background and credit checks
-Mandatory reporting of all involuntary mental health hospitalization and have that added to the registry
-Waiting period for ALL guns
-Require a class, require training, require insurance
-Close the gun show loophole

This is the bare minimum we should do. I personally would love to see a ban on the military style semiautomatic weapons reinstated, but that won?t happen until a few more of these teens are old enough to vote.

The helicopters are still overhead. The rest of the country is going back to normal, but our community will NEVER be normal again. Thousands of kids will forever be scarred by this. Thousands of families are directly affected by this. 17 families have lost the most precious thing in the world.? And it could have so easily been stopped or at least lessened by not giving this very troubled 18 year old kid the privilege of walking into a retail store (which are new to our city) and walking out with an AR15 moments later.

*One of the most rational straight up articles on these mass shootings is this one from the NYT. I highly recommend it. 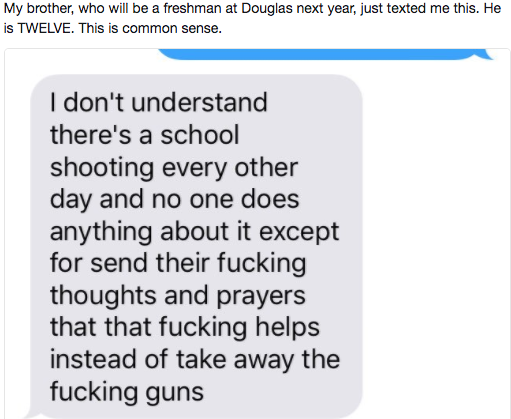 We know Carly’s family as well: 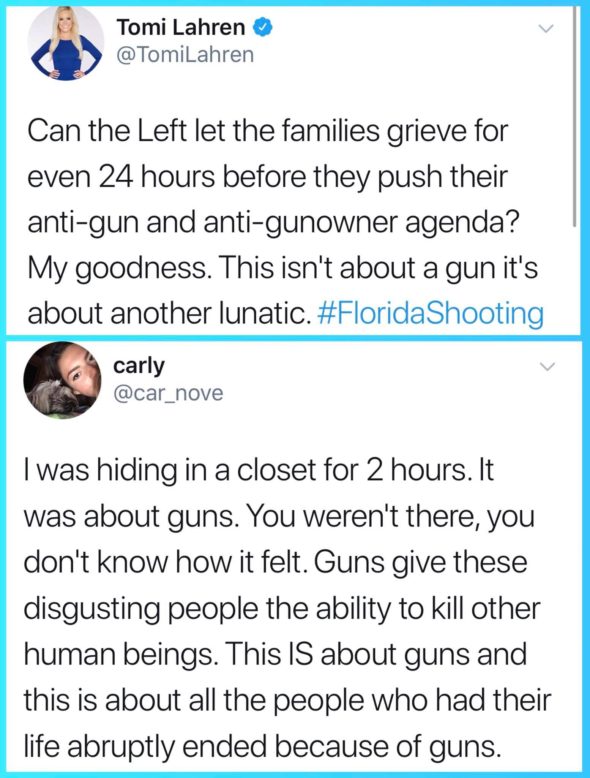 It’s funny how the young and innocent see it so clearly.

*Final note: Marjory Stoneman Douglas High School was just on the border in the very small town of Parkland. The school served both Coral Springs and Parkland, and some of the deceased are Coral Springs residents.

Ivie Sparaco is a book blogger, book signing organizer and now-former substitute teacher who has lived in Coral Springs within the Douglas border, about a mile from the school for 21 years. One child graduated and the other will be attending in 2019.

Caregiving, Cookies and Self-Care By MJ Santangelo I?m a wife, a mother of ... END_OF_DOCUMENT_TOKEN_TO_BE_REPLACED

Starting on Monday. What an ideal concept, right? Like Monday is the automatic ... END_OF_DOCUMENT_TOKEN_TO_BE_REPLACED