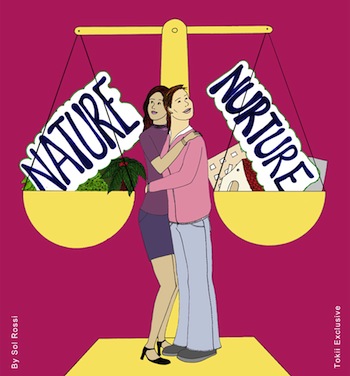 My husband and oldest son LOVE junk food, and my teen eats it non-stop. My husband just forgets to eat. (WTF? Who forgets to eat?) My little guy is not a big eater. He eats regular portion sizes. But he loves his sweets. Mr. Ana and my little guy are also the pickiest eaters ever (Mr. Ana is ridiculous, he eats like 5 things), so finding healthier choices isn’t easy.

It was one thing when my youngest was 5 and 6. He has a big mop of curly hair and is adorable. He still looks OK in clothes. But I saw him at a pool party yesterday and realized he was by far, the fattest kid there. With his hair wet, he wasn’t cute, he was fat. The problem is, so am I.

So I’m going to try to get in shape with him. Maybe doing it for HIM will motivate me more than anything else. My problem? I don’t know where to start. My husband does the shopping and he buys white butterbreads, and full fat everything. He wouldn’t touch whole-grain with a 10 ft. pole. So how do I convince my son to do something dad won’t do? Mr. Ana also refuses to acknowledge the issue, thinking he’ll grow out of it. He’s growing out alright…

I need to start doing little things I guess. More fruit, less sweets. We will ride a bike or play wii or basketball together every day. Any change is a good change. My parents are coming back to Florida for the season next month. Which means that now I’ll get nagged for my weight, and even more for his, because they won’t hold back.

Honestly, the boy really doesn’t eat a lot, I can’t believe he can be so big from the small amounts he eats. His friends eat double his amount and stay skinny. I don’t want to be all over him about it. His brother has called him chubby baby for so long, he’s used to having that image. He loves ‘Gibby’ from iCarly and wants to be like him…he thinks it makes him funnier. He doesn’t seem to care on the outside, but I’m sure he’s worried too.

So here is the nature vs. nurture issue. My two boys eat the same foods, have the same activity level. How can one be so skinny and one be so squeezable? In this case, no question, they were born that way. My teen takes after dad, who was always a string bean, little one takes after his mom (me), who always had a tendency towards fluffiness. (If my mom wasn’t all over me as a kid, and I didn’t dance and ice skate daily, I’m sure I would have been a fat kid too).

Now, I need to stop the outward growth. Any tips? Advice? I’d love some input! I don’t really cook much, so simple solutions are necessary! Share your thoughts on nature vs. nurture here as well.

Caregiving, Cookies and Self-Care By MJ Santangelo I?m a wife, a mother of ... END_OF_DOCUMENT_TOKEN_TO_BE_REPLACED

Starting on Monday. What an ideal concept, right? Like Monday is the automatic ... END_OF_DOCUMENT_TOKEN_TO_BE_REPLACED